Perhaps the most difficult step prior to setting up a craft fair display is in the decision of what to present. It takes on an even greater significance for newcomers who hope to make their mark or at least find the encouragement needed to participate in the next event. Los Angeles resident Jennifer Sargent recently attended a fair as a vendor for the first time, armed with her own unique handmade items. “I’ve always been crafty and creative. I’ve always toyed with the idea of selling my creations. It was not until I attended the Whimsic Alley Craft Fair in May of 2012 that I saw it was not too far from my grasp.”
Going in with some knowledge of how the process worked provided Jennifer with a swift entrance into the crafting community. Researching fellow bloggers with more expansive backgrounds also motivated her to open an Etsy store that offers the specially-designed plush creatures that she refers to as Nerdy Monsters. Each one is modeled to represent a different fandom or area of interest, though Jennifer is already examining ways in which she could expand her business.
The fair that she discusses here is different from what we have seen so far in that it caters to one very specific market and possibly a completely separate community from that in Seasons of Crafts. The fantasy-themed Whimsic Alley Craft Fair is held twice a year in May and November at Whimsic Alley, a specialty store whose offerings are mainly based on the Harry Potter series. Its small size limits the number of sellers that are allowed. Already registered for the next event in May 2013, Jennifer has yet to see a comparison between this fair and Etsy. “Since I am so new to both of them, it’s hard to form an opinion of which is my favorite yet. I made a little bit of profit at the fair and have yet to make my first Etsy sale.” 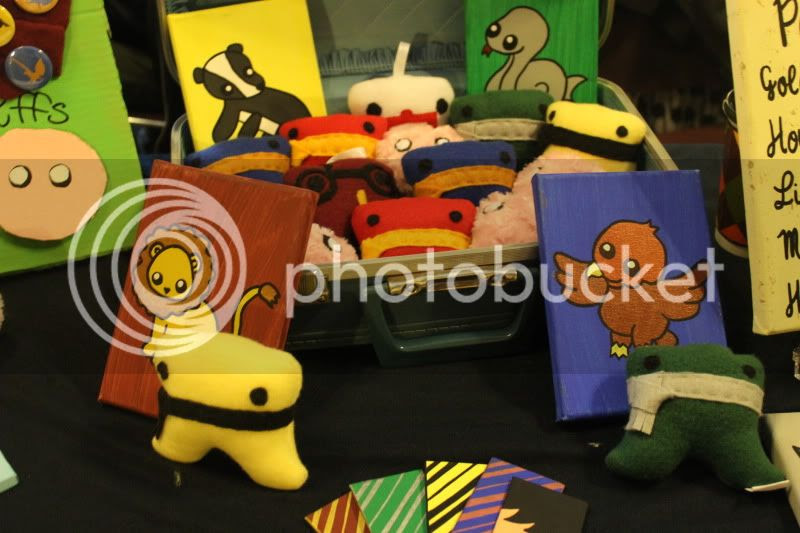 Expressing some of the traits discussed by Katie on creating a successful online venture, Jennifer shows a strong interest outside the community she has already joined. Finding one’s own place within it seems to be the common theme in all of our work to date. When I first began my own research, I saw examples of disillusionment and contrasting views on what usefulness the crafting community still has today. For the most part, it has expanded outward and is now defined differently according to outlet or category.

Nerdy Monsters are available at http://www.nerdymonsters.etsy.com/.
Photos from http://magiccatjenny.blogspot.com/.
Posted by Tom Oliver at 9:53 PM